– The broadcast opens up with a tease that Shane McMahon will call out Roman Reigns tonight.

– WWE Champion Kofi Kingston and Xavier Woods come out to the ring with pancakes to kick off the show. Kofi gets on the mic and talks about his journey as Champion so far, then he introduces a video package looking at his return to Ghana, Africa. Kofi talks about how great his trip was, and then Dolph Ziggler comes out and interrupts. Ziggler comes out to the stage and says he respects Kofi’s journey, but this isn’t about Kofi, it’s about why Ziggler is the way he is. Ziggler then introduces a video package looking at his career. Ziggler says it should have been him, and Kofi agrees that Dolph has had an incredible career, and Kofi also knows how it feels to be passed over. Ziggler and Kofi continue to exchange words, and then Kevin Owens and Sami Zayn come out to interrupt. Zayn and Owens head to the ring for their match, and Ziggler heads backstage.

– Kofi Kingston & Xavier Woods vs. Sami Zayn & Kevin Owens: Dolph Ziggler is shown backstage watching on a monitor. Owens gets in a lot of offense on Kofi early on, and he isolates Kofi in the corner. Kofi fires back with a dropkick, then Zayn tags in and Kofi levels him with a dropkick too. Woods tags in for the double team, and Kofi and Woods now take turns stomping on Sami in their corner. Sami rolls outside for a breather with Owens. Kofi goes flying and hits a suicide dive on Owens, then Woods hits a baseball slide kick on Zayn. Back in the ring, a cheap shot from Owens leads to Sami hitting a kick on Woods. Owens tags in, then takes Woods out to ringside and slams him into the barricade. Back in the ring, Woods comes back with a missile dropkick off the top on Owens. Kofi and Sami tag in, and Kofi cleans house. Kofi hits a series of strikes on Zayn, then Owens gets involved from the floor. Woods takes out Owens on the floor, which leads to Kofi hitting the Boom Drop for the three count.

– After the match, Dolph Ziggler hits the ring and attacks Kofi from behind with a superkick, then he lays out Woods too.

– Shane McMahon is backstage for a promo. He shows us footage of Shane spearing Reigns last night, while Drew and The Revival held Reigns back. Shane says anything Reigns can do, Shane can do better, because he’s the best in the world. Shane says he’s going to the ring soon to call out Reigns, and he wants to know if Reigns is a big dog or a little pup with his tail between his legs.

– Alexa Bliss comes out to the stage to host ‘A Moment of Bliss.’ She introduces her guest, SmackDown Women’s Champion Bayley. Before asking any questions, Alexa complains about her coffee and demands for a new one to be brought to her before she interviews Bayley. They exchange words, and Bayley gets fed up and slaps Alexa’s new coffee out of her hand. Carmella comes out to interrupt, and she thinks she’s in line ahead of Alexa for the Women’s Title. Charlotte comes out to interrupt next, and says she’s the one next in line for the Title, because she just talked to Shane McMahon about it. Charlotte reveals that there will be a triple threat match between Charlotte, Bayley and Alexa to determine the number one contender for Bayley’s Title.

– Carmella is shown backstage meeting with R-Truth. Truth gives her a pep talk about going after the Women’s Title. Truth says having the 24/7 Title is driving him insane, and he can’t get Shane to call him back about it. Shane calls and Truth asks him for help, because the 24/7 Title is ruining his life. Truth apologizes to Shane for interrupting Shane’s Appreciation Night. Shane tells Truth he needs a proper match tonight with standard rules. It sounds like that match is next. Truth runs to the Gorilla position.

– R-Truth (c) vs. Elias: This one appears to be a lumberjack match, and there is a number of wrestlers surrounding the ring. After some distraction from the lumberjacks, Elias hits a knee to the face of Truth for the three count, and Elias is now the 24/7 Champion.

– Shane McMahon is backstage walking towards the gorilla position.

– We see a pre-taped promo from Aleister Black once again issuing and open challenge to anyone who wants to man-up and face him. Black says this ain’t your daddy’s WWE anymore.

– Shane comes out to the ring with The Revival by his side. Shane makes Greg Hamilton give him his extended “Best in the world” ring introduction. Shane thanks The Revival for being with him tonight for emotional support. Shane rolls some footage of them beating down Roman Reigns last night on RAW. Shane talks about how to deal with dogs like Roman, and he says he’s going to “snip, snip, snip” and neuter the big dog on Friday at the Super ShowDown. Roman comes out to interrupt now. The Revival runs up the ramp to meet Reigns, but Reigns drops them both. Reigns goes down the ramp, but then Drew McIntyre runs out from the crowd and hits the Claymore kick on Reigns out of nowhere on the floor. Drew throws Reigns in the ring, and he holds up Reigns for Shane to beat on him. Shane hits a spear on Reigns, then he leaves with Drew.

– Kayla Braxton is in the ring, and she introduces Lars Sullivan for an in-ring interview. Lars says him attacking people is like a lion stalking their prey and sinking their teeth in them. Lars says he’s no man, for his entire life he’s been described by one word. Lars tells Kayla to say the word that he’s been called his entire life. She answers “freak.” Lars says when a lion performs his primary function they call it a lion, but when Lars performs his primary function they call him a freak. Lars says his function is to destroy and dehumanize people, and to show the people the world is full of pain, agony, and real life freaks of nature like him. Lars says he has a nursery rhyme about the Lucha House Party. “Three blind mice, watch how they run, watch how they’re caught, watch how their tails are ripped apart with my bare hands and a beautiful portrait is painted with their bodily fluids.” Lars laughs and leaves.

– We see the outside of Goldberg’s locker room door backstage.

– Andrade vs. Apollo Crews: Within the first minute of this one, Finn Balor runs in and the ref ends the match. Balor goes at it with Andrade, but Zelina Vega causes a distraction and Andrade drops him with the hammerlock DDT. Balor is down, and Andrade leaves with Zelina Vega.

– We see a shot of Goldberg’s locker room backstage again, and this time there is security waiting in the hallway for the former WCW World Heavyweight Champion to exit his room.

– Goldberg’s music hits in the arena, and he gets the knock on his locker room door. Goldberg exits and makes his walk to the gorilla position surrounded by security. Goldberg comes out to the ring without his usual pyro and gets on the mic. The crowd chants for Goldberg and he thanks them. Goldberg says he’s been waiting for 20 years to see what it’s like being in the ring with The Undertaker, and now he’s finally got the match he wanted. Goldberg addresses Undertaker’s promo last night, saying he isn’t interested in Goldberg being a family man now, he wants to face the old Goldberg. Goldberg says Undertaker’s right, and the family man wouldn’t stand a chance against Taker, so Goldberg left his ass at home. Goldberg says that Friday night, Undertaker is going to get the Goldberg he watched and wondered how he could stack up against. Goldberg says Undertaker is going to get the ass-kickin’ he asked for, and on Friday night we will find out who the better man is once and for all. Goldberg tells Undertaker that he’s next to rest in peace. Goldberg drops the mic, and then the lights go out and the gong sounds. The lights come back on and Undertaker is standing behind Goldberg. Goldberg turns around and faces Taker. The gong sounds and the lights go out again. The lights come back on, and Undertaker is gone. Goldberg is alone in the ring and he picks up the mic. Goldberg says “Friday night it is then.” He tells Undertaker to bring his jock strap and tighten it up, because it’s going to be a hell of a ride. Goldberg heads up the ramp and hugs and high-fives some fans. Goldberg yells into the camera “Goldberg’s what you want, Goldberg’s what you’re gonna get,” then he heads to the back.

– The broadcast team runs down the card for Friday’s Super ShowDown pay-per-view and SmackDown goes off the air. 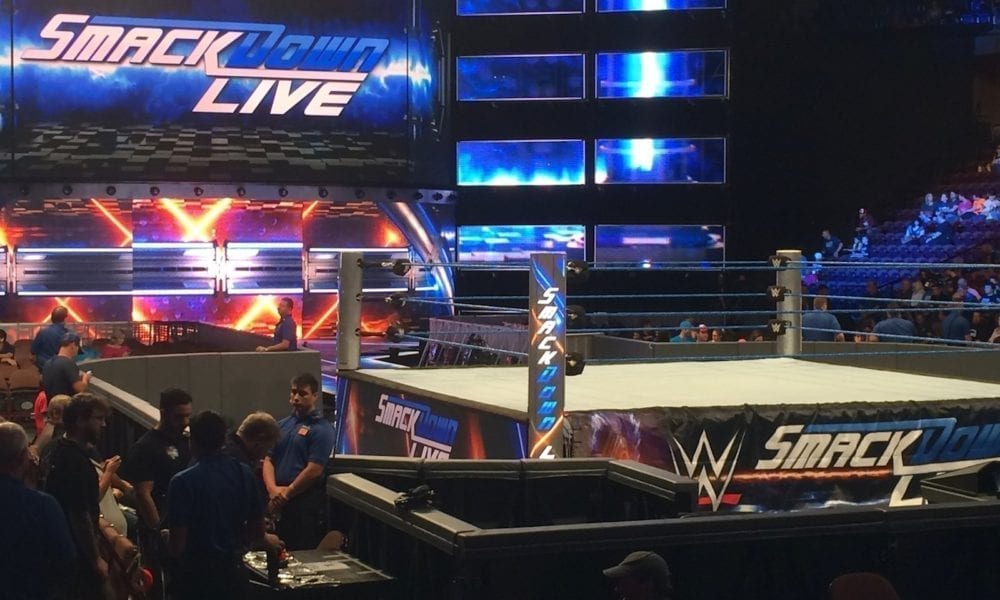 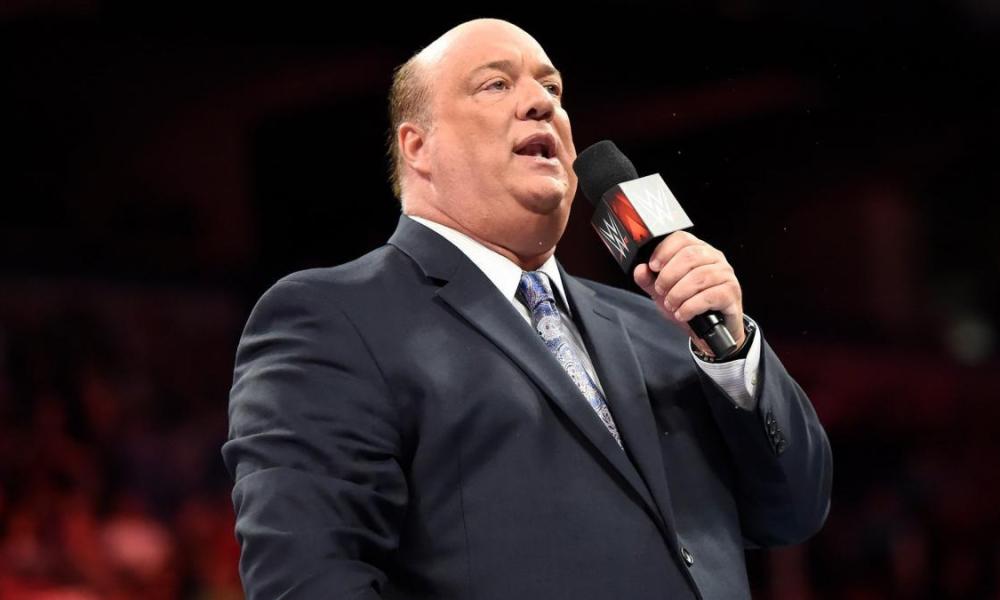