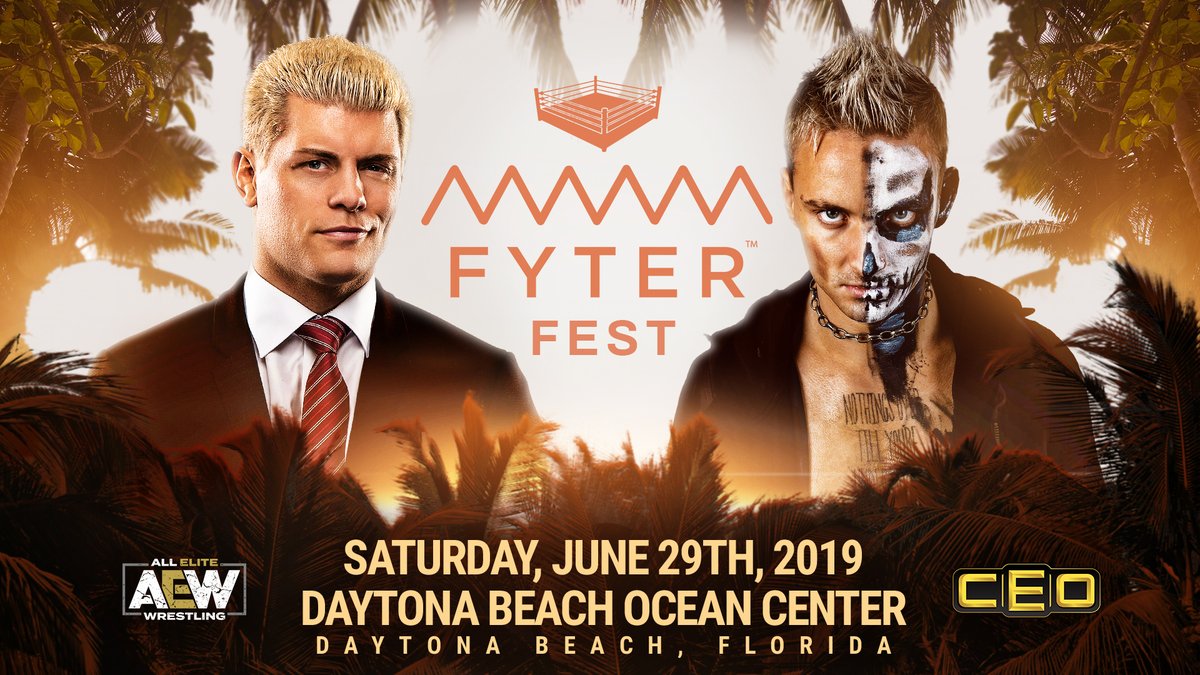 The Buy In pre-show

This was a very fast-paced match, as you would expect.  At one point Marq Quen did an amazing shooting star press on Trent but he did not get the pin. Private Party really broke out as stars in this match. Best Friends with their Absolute Zero finisher. Fantastic match.

They showed a pre taped promo with The Dark Order. The lights went out and they appeared around the ring while Best Friends were still in it. Lights went out, Dark Order disappeared.

Leva Bates and Peter Avalon cut a heel promo before this match got started. This was a good match. A few near falls. The finish was Avalon tossing a book to Allie that looked like it was meant for Bates. Allie hit the super kick and got the pin.

They did a backstage segment. Kenny Omega was told that Blink 182 pulled out.

Nakazawa cut a heel promo before the match. Jenailey used a gaming counsel. They brawled up to a kiddoe pool filled with water. More weapons were used in the rimg including a table and kendo stick. Nakazawa speared Jenailey through the ropes and through the table at ringside. Nakazawa had the match up but he pulled him up and then used the kendo stick on Jebailey. Jebailey hit a sick looking overhead suplex and Nakazawa landed on the back of his head. Later, Nakazawa did a back body drop on top of Legos and then he used the kendo stick. Jebailey had a pin but the ref was blinded. That allowed Nakazawa to reverse for the pin.

Very good match with several bear falls. Everything they did was solid. Cima won with two diving knees off the top to the head of Daniels, who was laying back first in the ring.

Very good match. Rose did a lot of power spots and Riho and Sakazaki did the fast paced stuff. Rose did a sick legdrop on Rijo, who was hanging off the top rope. Rose missed a swanton bomb, Riho hit a crossbody by Rose caught her. She also caught Sakazaki. There was a near fall by Sakazaki. The finish was Riho countering a powerbomb attempt into a roll up and pin. Rose attacked both women after the match Riho shoved Sakazaki.

MJF did some great heel mic work before this match got started. Very good match. There was one scary spot when Jungle Boy did a crazy corkscrew dive onto the floor but thankfully the guys caught him before his head cracked the floor. Page hit his Deadeye finisher on Havoc for the win.

Cody dominated at a slower pace for the first 10 minutes but Darby began to make a babyface comeback. One cool thing js that they have the time keeper announcing how much time is remaining during the matches. There were 5 minutes left when Allin really picked up steam. Cody did a spectacular looking inverted backdrop on Allin from the top but Allin kicked out. A minute later, Allin did a back first dive and hit the ring apron hard after Cody moved. Cody but Allin in a body bag and then hit the disaster kick but Darby kicked out.  Cody used a leather belt but Darby kept fighting. Cody hit the Cross Rhodes but time limit expired. The match is a draw.

Shawn Spears walked to the ring and busted Cody’s head with a chair. MJF ran in late to save his “friend” Cody. SCU ran down too. Trainers helped Cody to the back.

The Young Bucks and Kenny Omega vs. The Lucha Bros. and Laredo Kid

The Bucks and Omega did a Street Fighter/Mortal Kombat-like entrance. This could be the match of the night. Too many crazy moves to type out. There were more signs of trouble with the Bucks when Matt accidentally speared Nick. Insane match. Omega hit the Angels Wings and pinned him.

They brawled into the crows within seconds after the match started. Moxley brought a chair wrapped in barbed wire and used it on Janela. Janela also used it on Moxley. Later, Janela did a Russian leg sweep onto a table at ringside. Seconds later, Moxley did a running slam on Janela through a table in the corner of the ring. Moxley brought a barbed wire board into the ring but it was Janela who put Moxley through it. Later, Janela dove off a ladder in the ring and did a massive diving elbow on Moxley through two tables set up side by side at ringside. Later on, Moxley dumped Janela theough the barbed wire board that was set up between the ring and barricade. This is a straight CZW/ECW match. Moxley dumped thumbtacks in the ring and then took off Janela’s boots. Janela was slammed on the tacks while barefoot. He also slammed him feet and butt first on the tacks. Moxley poured another bag of tacks and then hit a big time Dirty Deeds. Moxley won. Omega attacked Moxley, they fought into the crowd and Omega laud him out on the ramp/stage.

Britt Baker On Balancing Her Jobs As Wrestler & Dentist