All Elite Wrestling: Double Or Nothing Results 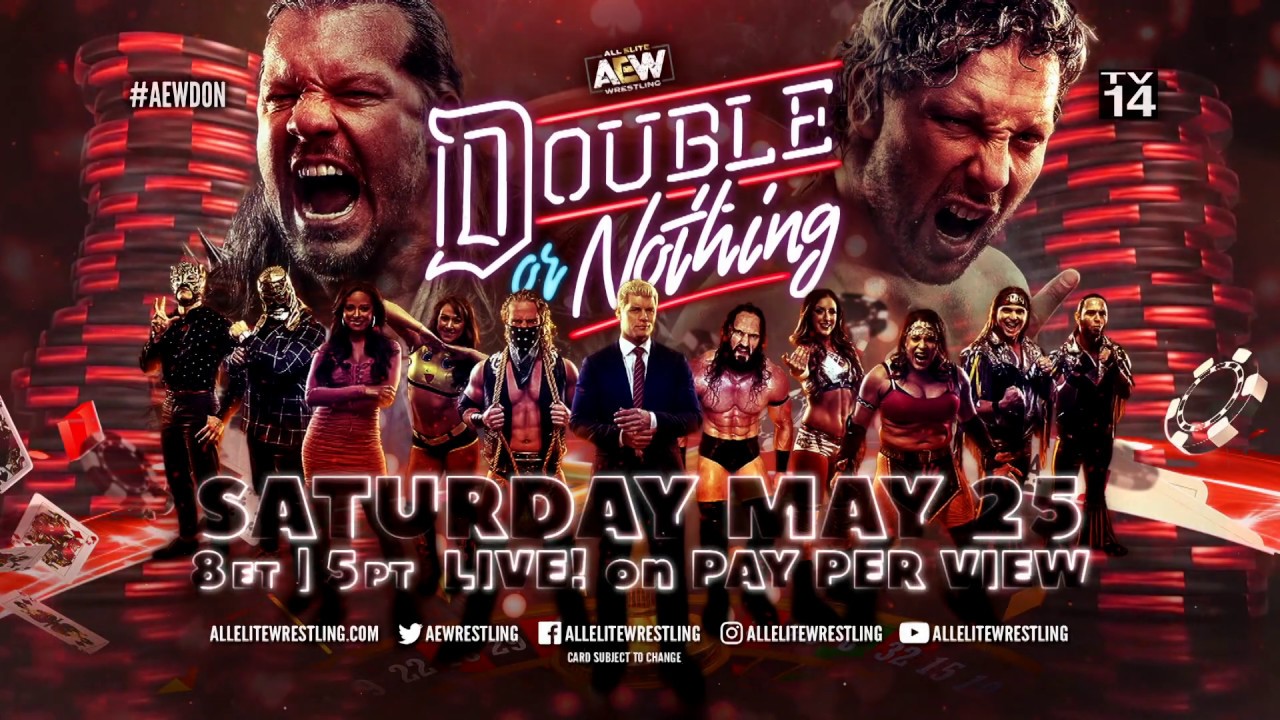 AEW DOUBLE OR NOTHING 2019 Card

Nightmare vs. Natural
* Cody vs. Dustin

21-Man Casino Battle Royale (“Buy-In” PRE-SHOW)
* Sonny Kiss vs. Brandon Cutler vs. Ace Romero vs. Glacier vs. Brian Pillman Jr. vs. Sunny Daze vs. MJF vs. Joey Janela vs. Dustin Thomas vs. Billy Gunn vs. Jimmy Havoc vs. Michael Nakazawa vs. Jungle Boy vs. Isiah Kassidy vs. Marq Quen vs. Luchasaurus vs. Shawn Spears vs. TBD vs. TBD vs. TBD vs. TBD

Hangman Page drew the joker card and entered this match at lucky number 21. Before then a slew of spots occurred, including Jimmy Havoc stapling a lit cigarette to Joey Janela’s head.

MJF tried to sneak up on Page when it came down to just the two of them but Page (who was in full gear for the match) was too quick him. He delivered a buckshot lariat and tossed out Friedman to get the win and earn a title shot.

After a crazy back and forth match, Kip Sabian picks up the win in the first ever single’s match in AEW history.

SCU came out all decked in USA gear and cut a promo before the match. They surprisingly said that Las Vegas was the worst town they had ever been in.

SCU picked up the win after delivering a Best Meltzer Ever to El Lindaman for the win.

Brandi Rhodes came out before the match could get underway and introduced Awesome Kong as the newest member of the women’s AEW roster. Not only that, Kong would be the 4th entrant in this match. Nyla Rose would take her out with a sphere, leaving Baker alone in the ring with Kylie Rae. Baker got the win after a shoulder breaker.

Jack Evans and Angelico vs the Best Friends kicked off AEW’s tag team division in this match. After a back and forth contest, it was the Best Friends picking up the win after delivering a spiked pile driver. After the match, the two teams looked as though they were gonna hug it out when the lights went out. When the lights came back on, the Super Smash Bros were in the ring. The lights went out again, and when they came back on, 8 or 9 wrestlers were in the ring and they laid waste to both teams.

Hikaru Shida, Riho & Ryo Mizunami were the winners here in a match reminiscent of what you would see in Stardom or a similar Joshi promotion. Aja Kong looked as though she was going to come out of this match the big star but she got taken out after hitting her teammate with her patented spinning back fist.

Hikaru Shida then picked up the win on Sakura with a Shining Wizard.

Before the match could begin, Cody sent a message to Triple H:

In a match which will likely go down in history, Cody and Dustin Rhodes battled in a bloody match which the fans loved. Cody played the heel throughout the match. Brandi was even ejected from ringside after delivering a spear to Dustin.

Dustin looked as though he was going to hit Dustin with a Shattered Dreams but Cody removed the turnbuckle. When Dustin charged anyway, a drop toe-hold from Cody into the exposed turnbuckle busted him wide open. After taking a beating from Cody, Dustin would make a comeback and get a few near-falls but it was all for not. Cody won after reliving a Cross Rhodes for the second time.

After the match, Cody asked Dustin to be his tag team partner next week at Fight for the Fallen against the Young Bucks.

Bret Hart was brought in to introduce the new AEW World Championship belt. Hart brought out Hangman Page but they were interrupted by MJF. Jimmy Havoc and Jungle boy joined Hangman Page in giving MJF his due to end the segment and Hart showed the live crowd the title belt.

This was exactly the type of match everyone was likely expecting it would be. Up until this match, these two teams had faced each other several times in PWG and once for the Crash in Mexico. The Bucks would deliver their usual arsenal of offense as would the Lucha Bros, so it was innovative tag team moves throughout the match.

The finish came when the Bucks hit a Meltzer Driver on Fenix for the win.

Jericho came out to an elaborate entrance which included having stand-ins dressed as his previous personas. Jericho himself came in looking in great shape.

Jericho gained the advantage by putting Omega through a table. Omega also looked like his nose got busted open early as well. Omega kicked out of a codebreaker once earlier in the match but after Jericho delivered his second he broke out a new move after. Jericho delievered a spinning back elbow he calls Judas and Omega wouldn’t kick out. The crowd was stunned.

After the match, Jericho cut a promo taking credit for AEW success. Jon Moxley then appeared out of the crowd and took out Jericho. Them Moxley took out a ref and then he turned his attention to Omega. After the two brawled on the outside, Moxley through Omega off the top of the gambling chips onto the floor to end the show.

Before the Bell: The Story of All Elite Wrestling

How to Stream AEW Double or Nothing Online