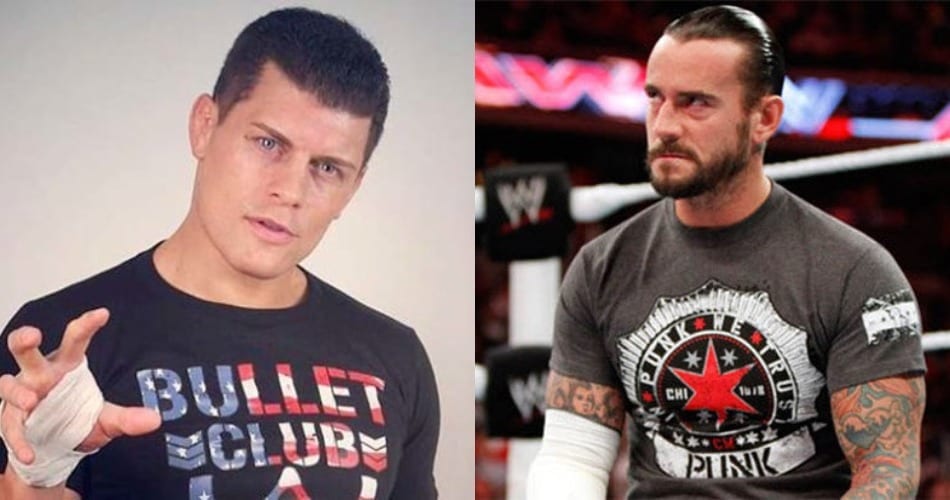 ComicBook.com has published another highlight from their recent interview with AEW Executive VP Cody Rhodes. In this installment, Cody talks about the possibility of former WWE Champion CM Punk joining All Elite Wrestling.

AEW has three shows scheduled for the coming months. On June 29th, Fyter Fest takes place from Daytona Beach, FL at the annual CEO gaming convention. On July 13th, Fight for the Fallen hits Jacksonville, FL. Both are considered “2nd tier” shows, with Fyter Fest streaming for free on B/R Live and Fight for The Fallen expected to get the same treatment.

AEW’s next pay-per-view is ALL OUT from the Sears Center outside Chicago, IL. The card is shaping up to be must-see, with two matches confirmed:

With AEW gaining momentum ahead of its premiere on TNT this fall, there’s naturally been speculation that the organization will play the ultimate wild card and sign CM Punk. ALL OUT will be a stacked show either way, but the debut of CM Punk would send shockwaves throughout the industry.

Cody Rhodes on CM Punk At ALL OUT

Cody told Comic Book that The Elite was pleasantly surprised last year at All In when they did not hear a single CM Punk chant. He knows wrestling fans and the Chicago audience in particular still love Punk, but it was gratifying that fans were focused on the show that was being presented instead of a possible surprise appearance. That said…

“I’ve been very honest about that door remains opened. The fans have never given up on CM Punk and if he wanted to be part of AEW we would do everything in our power to make him part of it.”

For now, AEW’s focus is putting on the best show possible. They have 25-35 brand new stars that they’re working on getting over, including Britt Baker, MJF, Jungle Boy and Kylie Rae. They’d love to have CM Punk, but the focus of All Out will be crowning AEW’s inaugural World Champion.

Rhodes continued: “That door will forever remain open to CM Punk. He was very good to me in OVW. He was a great person to learn from in the ring. I had a good relationship with him. That door will remain open, but for All Out the main focus for me is Hangman Page and Chris Jericho to determine the very first AEW World Champion.”

Tickets for AEW: ALL OUT go on sale this Friday at AEWTIX.com.

AEW All Out Sells Out In 15 Minutes