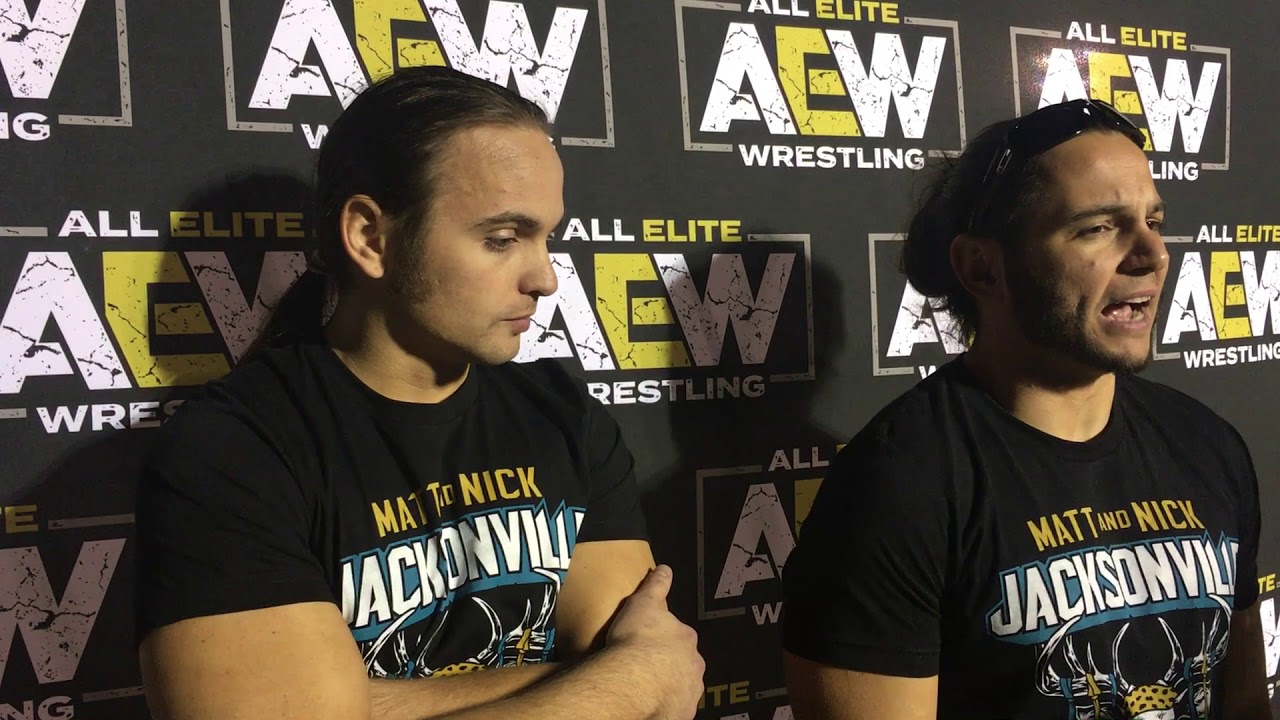 With their vision coming to fruition this Saturday night at the show they helped put together, Double Or Nothing, The Young Bucks sat down with Justin Barrasso (@JustinBarrasso) of Sports Illustrated to promote the inaugural All Elite Wrestling (AEW) pay-per-view event.

The interview came just a few days after the promotion announced their deal with Warner Media Group at the recent Upfronts in New York City. As noted, the deal calls for a weekly AEW program to air on TNT.

“It’s exciting to know that so many fans who may not have seen or even heard about us now have the opportunity to do so,” said Matt Jackson when referrin to the AEW on TNT show. “TNT will shine a spotlight on so many talented wrestlers who look, feel and sound so different than what casual fans might be used to.”

During the interview, Barrasso broke the news to Nick and Matt Jackson that WWE is already planning to air programming directly opposite their show. The SI journalist informed them that WWE has a Tuesday night program that is rumored to be premiering on FOX Sports 1 (FS1) after the company moves SmackDown Live from USA Network to FOX as part of their new cable television deal.

“I didn’t know any other wrestling organization was planning on airing opposite of us until this interview,” Matt said in response to the news. “So, that’s news to me!”

We sat down & talked to @SInow! Check it out: https://t.co/mwGQyljsf9

Nick Jackson, however, took things a bit further. Nick would go on to talk about the pro wrestling business needing competition right now, so he’s happy to hear the news.

“I love it,” said Nick. “That’s exactly what wrestling needs right now, competition. They’ve been so comfortable for the last two decades that they need something like this. This only helps the whole landscape of wrestling.”

The Young Bucks also discussed the creative process behind-the-scenes at the new upstart wrestling promotion, which also consists of creative input from other AEW executives, including Tony Khan, Cody Rhodes, Brandi Rhodes and Kenny Omega, just to name a few.

“The creative team is essentially a group chat that goes 24 hours a day, seven days a week,” Matt said of the creative process in AEW. “Some people in the group think a bit more traditionally, while others think super outside the box. We always come to some sort of agreement, somewhere in the middle. It’s a recipe that works. The process has been both challenging and incredibly rewarding.”

Nick offered his brief follow-up, agreeing that the group has had a good cross-balance that has “meshed well” thus far.

“So far, it’s been pretty good,” said Nick. “We all are fantastic at separate things and, when we come together, it all meshes well.”

Also during the interview, The Young Bucks were asked about another popular topic in the pro wrestling community this weekend, the Starrcast 2 convention and in particular, how The Undertaker was pulled from the festivities after initially being advertised.

“I was actually very sad to see him taken off,” said Nick about the WWE legend being forced out of his advertised appearance. “Fans would’ve loved to meet him in Vegas.”

AEW: Double Or Nothing 2019 goes down from the MGM Grand Garden Arena in Las Vegas, Nevada on Saturday, May 25th. The show will air live via pay-per-view, and will be available via the Bleacher Report (B/R) Live online streaming service for $49.99.

Featured below is the current advertised lineup heading into Saturday night’s AEW PPV:

Nightmare vs. Natural
* Cody vs. Dustin

21-Man Casino Battle Royale (“Buy-In” PRE-SHOW)
* Sonny Kiss vs. Brandon Cutler vs. Ace Romero vs. Glacier vs. Brian Pillman Jr. vs. Sunny Daze vs. MJF vs. Joey Janela vs. Dustin Thomas vs. Billy Gunn vs. Jimmy Havoc vs. Michael Nakazawa vs. Jungle Boy vs. Isiah Kassidy vs. Marq Quen vs. Luchasaurus vs. Shawn Spears vs. TBD vs. TBD vs. TBD vs. TBD

Check out Justin Barrasso’s complete interview with The Young Bucks at SI.com. Also, check out our Staff Predictions Roundtable feature for AEW: Double Or Nothing 2019, for detailed insight and analysis into each match on the card.

Before the Bell: The Story of All Elite Wrestling