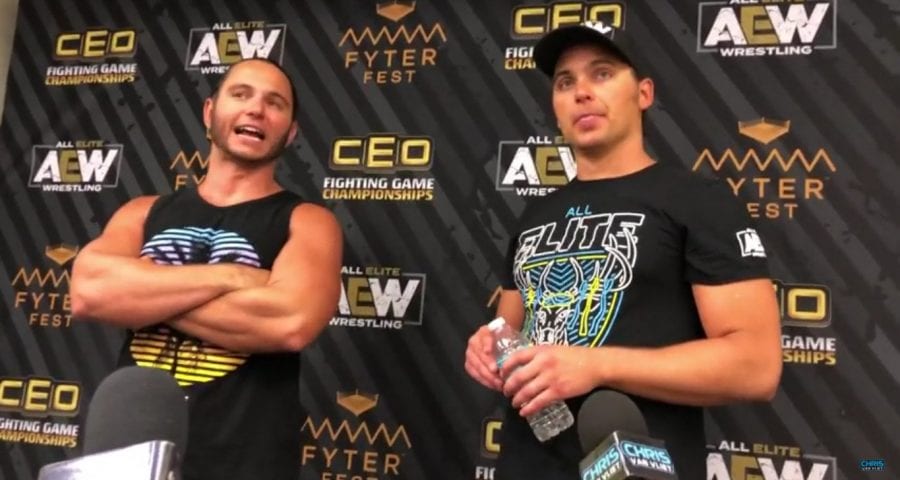 The Young Bucks teamed with Kenny Omega last night at AEW Fyter Fest last night. The trio took on and defeated the Lucha Bros and Laredo Kid. After the event, the Young Bucks were asked about potentially introducing trio titles to AEW. Matt & Nick Jackson say they don’t want to oversaturate their title belts, however.

“No, we don’t want to over-saturate the titles,’ Nick Jackson responded when asked about adding trios titles.

“We have one (championship),” Nick continued.

“I think that’s enough,” Matt added. “That’s what I would do, keep it really simple. I mean there are great 6-mans…”

“We don’t need titles for them,” Nick added.

The brothers also addressed their Street Fighter themed ring-gear for the event.

“We’re big Street Fighter fans,” Matt said. “Kenny’s the biggest. I kind of dropped off after 2. Nick’s a 2 guy too, I bought him the arcade. We’re just big Ryu, Ken, and Guile fans.”

The Bucks also address time-limits being used in their matches.

“We discussed that yesterday, actually,” Matt said. “That’s one thing I think I like that people do overseas internationally. I don’t know why but it makes it seem more sporty.”