Yim easily picks up and tosses Aliyah to the mat, Aliyah with a reversal and talks some trash. Yim returns fire and does some taunting of her own. Aliyah sent into the corner, Yim looks for the cannonball senton, but Borne pulls Aliyah out of the way. Back in the ring, Aliyah snaps Yim down to the mat by the hair, cover, two. Kick to Yim’s back, knee drop, charges in and eats a kick. Yim locks in the tarantula. Aliyah with an enziguri, pin, two-count.

Aliyah tries for another knee drop, misses, sent into the corner and Yim hits the cannonball senton this time. Yim with multiple kicks, belly-to-belly overhead release suplex, Aliyah to the floor. Borne goes over to check on her buddy, Yim with a suicide dive, taking out both women. Back in the ring, Aliyah tries for a crossbody, caught, Yim hits a fallaway slam, protect ya neck hits, 1-2-3.

– Post-match, she sends Borne into the steel steps, then heads over to commentary. Yim says this is where Baszler likes to deliver messages, she says she’s not only coming for Baszler’s title, she’s coming to whoop that ass.

– Last week, clips are shown of the NXT Women’s Championship Steel Cage Match between Candice LeRae and Io Shirai. After the match, Shirai turned on LeRae.

– Backstage, Cathy Kelley talks with NXT General Manager William Regal to get an update on Candice LeRae. Regal says it’s a week-to-week thing with LeRae. Forgotten Sons burst and complain about tag teams making matches, instead of Regal. They demand a title shot. Regal says they had that opportunity, but they got themselves disqualified and they are now at the back of the line. Kelley asks who’s in line for The Street Profits, if it’s not the Forgotten Sons. Regal says next week it will be Oney Lorcan and Danny Burch vs. The Street Profits.

– NXT Champion Adam Cole is on his celebration tour. He stops at a restaurant called “Gargano’s.” Cole walks in and says he’s here for the four pizzas. Gargano’s parents look at him suspiciously. While they’re in the back, Cole posts up a photo of himself on the wall. Cole then mentions the wall on the way out, Frank (Gargano’s dad) heads off and takes the photo down. Cole goes to a wrestling school that Gargano recently visited. He talks to a bunch of wrestlers and says the advice Gargano gave is crap, Gargano was lucky to get where he got. Cole calls out one of the wrestlers and says does he really think he could be NXT Champion? He says the pizza is for them, take it home, and just quit. Cole is asked to leave. On his way out he tells the group to “get out of this school, get out of this city, and find a new hero.”

KUSHIDA immediately works the mat game against Parker, who can’t seem to get away. KUSHIDA with a handspring back elbow, drop toe hold, right into stretching his shoulder out. Parker finally lands a punch, but KUSHIDA with a hip toss into a cartwheel dropkick. KUSHIDA with a straight punch to the face, sakuraba lock, and that will do it.

– Backstage, Kelley asks Tyler Breeze what he thinks of some of the current roster saying that they are the ones who made NXT. Breeze says he needs to give those people a refresher that this was “N-X-Breeze” long before Undisputed Era ever stepped foot in the promotion.

Scott is previously Shane Strickland and Cameron Grimes was known as Trevor Lee in Impact. Chain wrestling get things going as each wrestler pulls off a few counters. Scott with a hurricanrana, kip-up into a dropkick, snap mare, european uppercut off the second rope. Grimes recovers, works over Scott, chokes him with his boot, big lariat, pin, two. Scott back up, lariat, Scott gets sent out to the floor, but lands on his feet. Grimes goes out, Scott jumps in, ends up splashing down on Grimes as he came into the ring. Scott with a rolling flatliner, cover, two.

Grimes with a back slide, right into a sit-down powerbomb, two-count. Scott drops Grimes, big kick to the head, Grimes out to the floor, Scott with a fosbury flop. Back in the ring, knee strike on Grimes, Scott looks for a crossbody, but Grimes counters in midair for a splash. Grimes with a standing double stomp, cover, 1-2-3.

Zuniga was Diamante in Impact Wrestling. Belair doesn’t seem to impressed with her opponent, pie faces her a few times, Zuniga does it back. Belair ends up shoving her across the ring, takes off her earrings, and swings away wildly on her opponent. Belair sends her into the corner, throws her down to the mat, Belair with a spear in the corner. Belair with a military press, along with a few squats, before letting her drop way down to the mat. Belair runs right into a boot, Zuniga tries for a second rope hurricanrana, caught, Belair with two powerbombs and a third, sending her opponent face first into the top turnbuckle, KOD hits, cover, and we’re done here.

– Roderick Strong gets ready for his match later tonight.

– Clips are shown of Matt Riddle training. He talks about how he got into fighting, going to UFC, and now NXT. Riddle says people are afraid of him in the WWE PC as he continues to train and get faster/strong.

Breeze unloading on Strong in the corner, referee starts his five count. Breeze yells at the referee not to touch him. Strong with a big strike, sends Breeze out to the floor, looks for the wrecking ball dropkick, nobody there, Breeze smacks him, sends him into the apron. Strong looks like he trips over the stairs, then catches Breeze and launches him at the edge of the steps, then a backbreaker on the barricade.

Back in the ring, Strong continues to stomp away on Breeze’s back. Dropkick to the jaw, pin on Breeze, two-count. Strong stretches out Breeze, continuing to put pressure on the back. Breeze avoids Strong, hits a jawbreaker, punch to the face, and sends Strong out to the floor. Strong comes right back in, enziguri sends him back out. Breeze with a leaping forearm off the apron, still holding his back. Strong sent back into the ring, another forearm strike in the corner, Breeze hits a backstabber, cover, two.

Strong runs towards the corner, Breeze catches him with a kick, heads up to the top rope, and Strong with a enziguri to slow him down. Both up two now, sending punches back and forth. Strong finally hits a superplex, cover, two. Breeze with a double boot to Strong’s chest. Breeze on the apron, kick to the head, Breeze slingshots in, gets caught, but wriggles away to hit a superkick, cover, two. Back and forth punching, Breeze with another enziguri and he heads to the top. Undisputed Era runs out for the distraction, Breeze kicks away Fish. Strong with a kick to Breeze’s face, end of heartache lands, cover, 1-2-3. 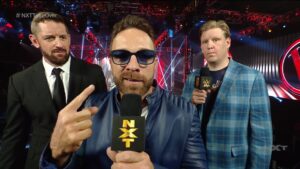 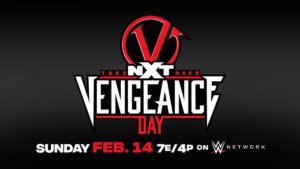