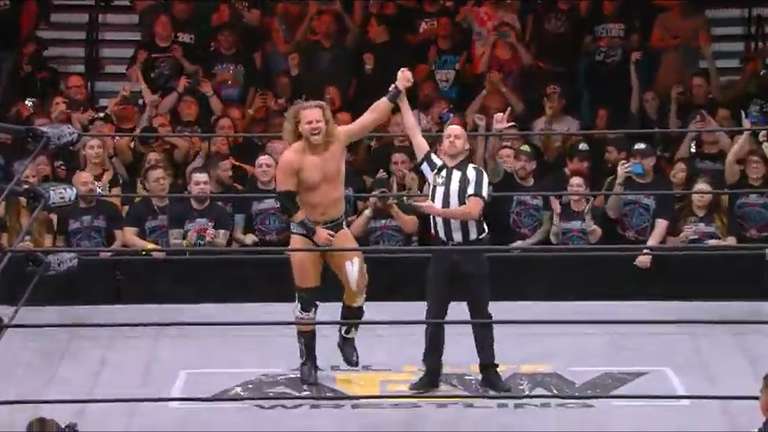 Hangman Page said he wasn’t cleared to compete at Double or Nothing but it turns out that wasn’t the case. Page drew the Joker card for the Casino Battle Royale, allowing him to enter at lucky number 21.

MJF attempted to hide and then attack Page after Hangman thought he threw out his last opponent but the ruse didn’t work. Page delivered a Buckshot Lariat to Friedman and tossed him to the outside for the win. The victory not only puts Page into the record books as the winner of the first official AEW match, he also earns a title shot in the process.

On the Road to Double or Nothing earlier this week, AEW announced that the winners of the Casino Royale and Omega vs Jericho would face each other at a later date with the winner becoming the 1st ever AEW World Champion.

Hangman Page will go onto to face the winner of Chris Jericho & Kenny Omega at a later date for the #AEW world championship. #AEW #AEWDON #DoubleOrNothing

Eric Bischoff On AEW’s Subtle Nods To WCW, How They Should Compete With WWE